The Eureka small-scale mining licence, comprising 345 hectares, is accessed by a 100km dirt road from Kabwe, west of the Zambian Copperbelt district.

Intermittent exploration by previous operators over several decades has generated extensive layers of very useful information, including soil geochemistry, pitting/trenching, ground magnetics, induced polarisation and electromagnetic surveying, structural interpretation, as well as diamond drilling and reverse circulation (‘RC’) drilling. Xtract has acquired the data and has worked with its technical consultants to review and integrate the various elements in order to assist with drill target selection.

Of particular interest is a northwest structural corridor with coincident anomalous regional soil geochemistry for copper and gold. The anomaly extends for over 3km, much of it within the Eureka licence, with peak values of 1,315ppm Cu, 540ppb Au. Limited historical drilling within the core of the soil anomaly intersected up to 25.7m @ 3.30% Cu and 0.25g/t Au, including 9.7m @ 5.9% Cu and 0.26g/t Au within a shear zone. A shallow open pit was developed by a local operator within this resource in 2008, when about 1,000 tonnes of ore at 3% Cu was reportedly recovered. Mineralisation intersected by historic drill holes and partially mined remains open in several directions. In particular, mineralisation is open to the southeast of the pit as well to depth.

A second sub-parallel copper anomaly in soils about 600-700m long occurs at Eureka West, 1km to the southwest of the main Eureka pit. A small pit at this locality was operated by artisanal miners – the ‘villagers pit’. A composite grab sample taken by Xtract from hand-sorted boulder piles at the site returned assays of 9.81% Cu, 1.94g/t Au, 13.77g/t Ag. Short historic drill holes in this area appear to have missed this target.

Apart from these two priority targets, several other geophysical anomalies were highlighted by historic exploration but not followed-up. Xtract proposes to re-visit these to determine if they warrant drill testing. 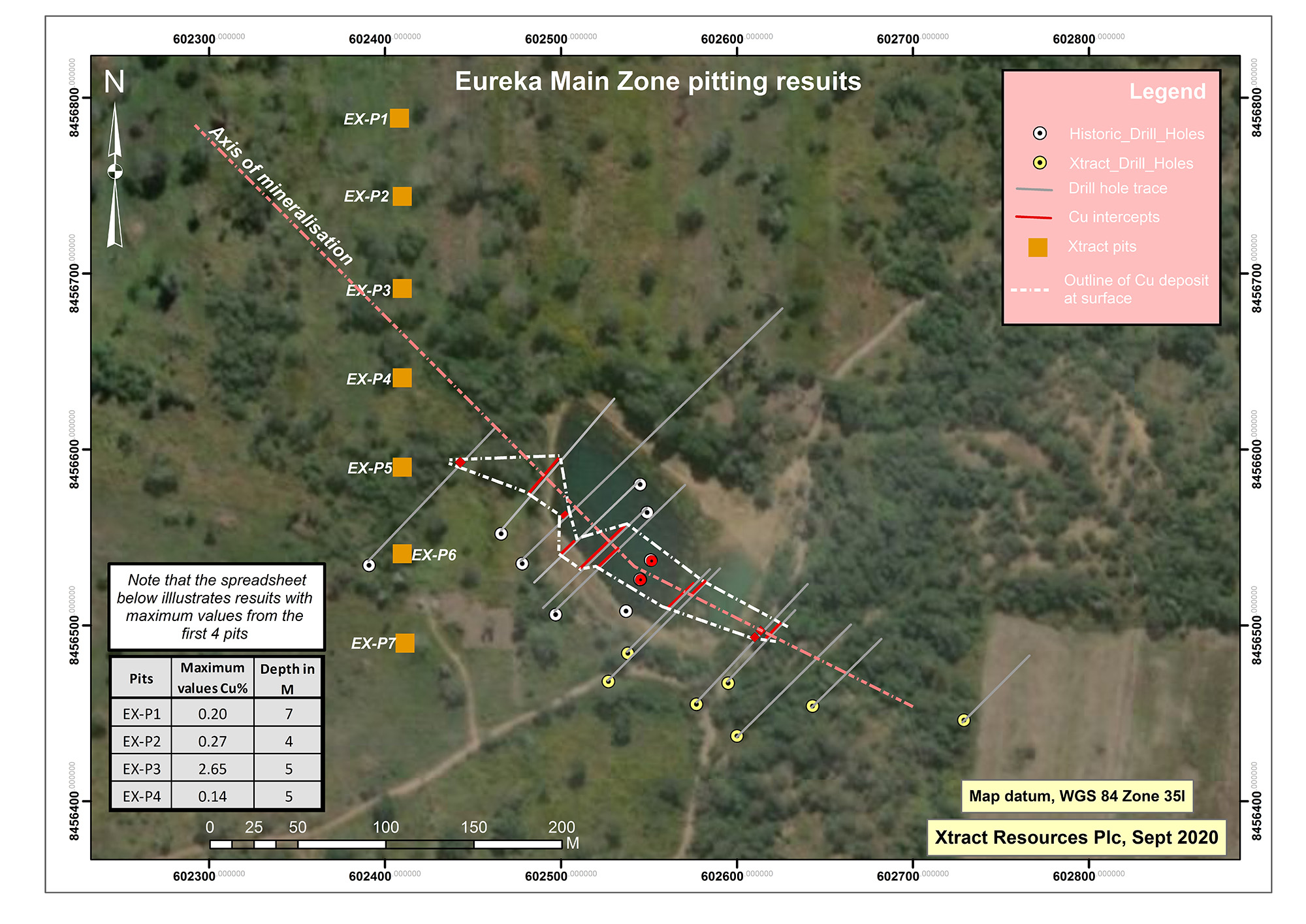 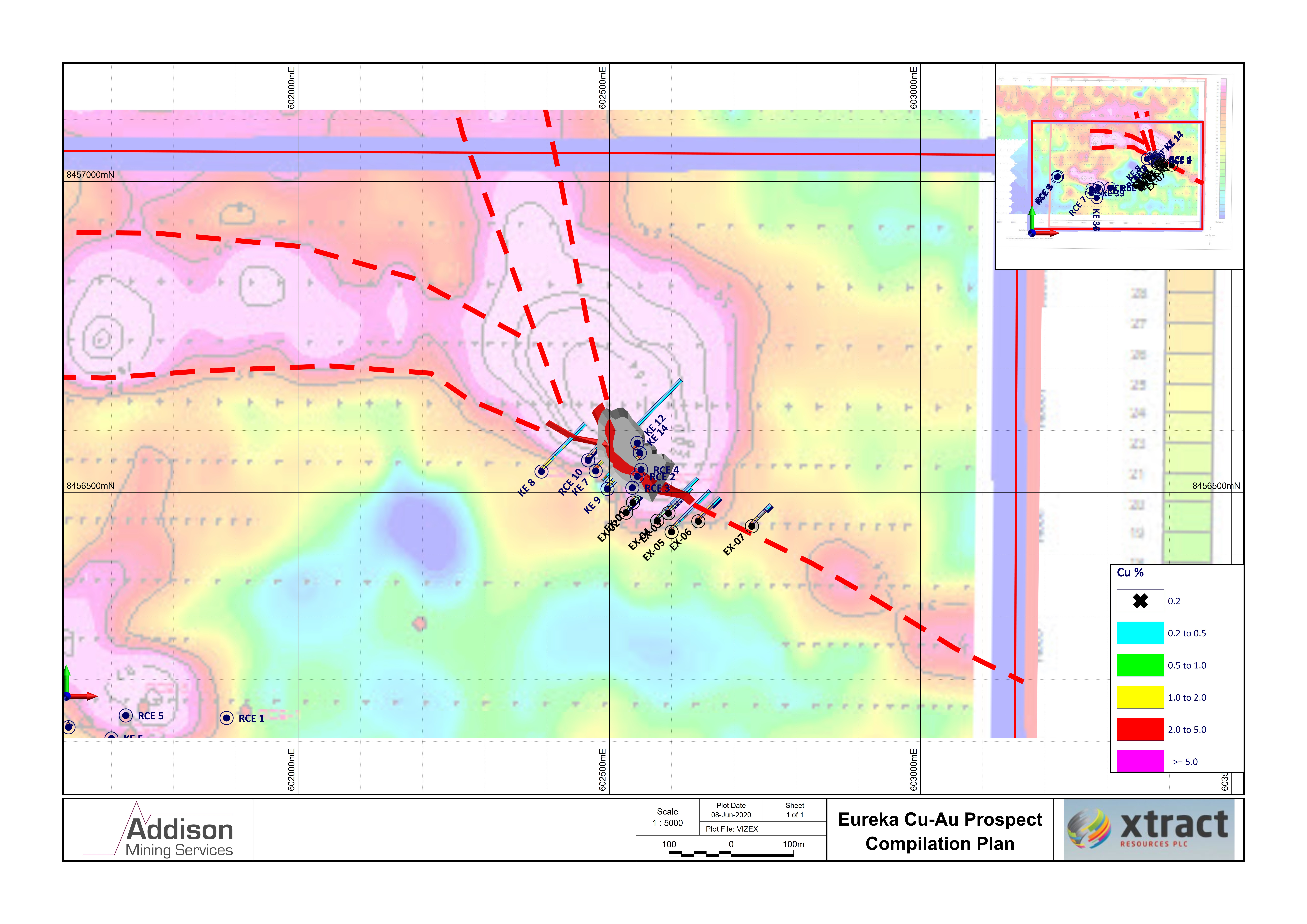 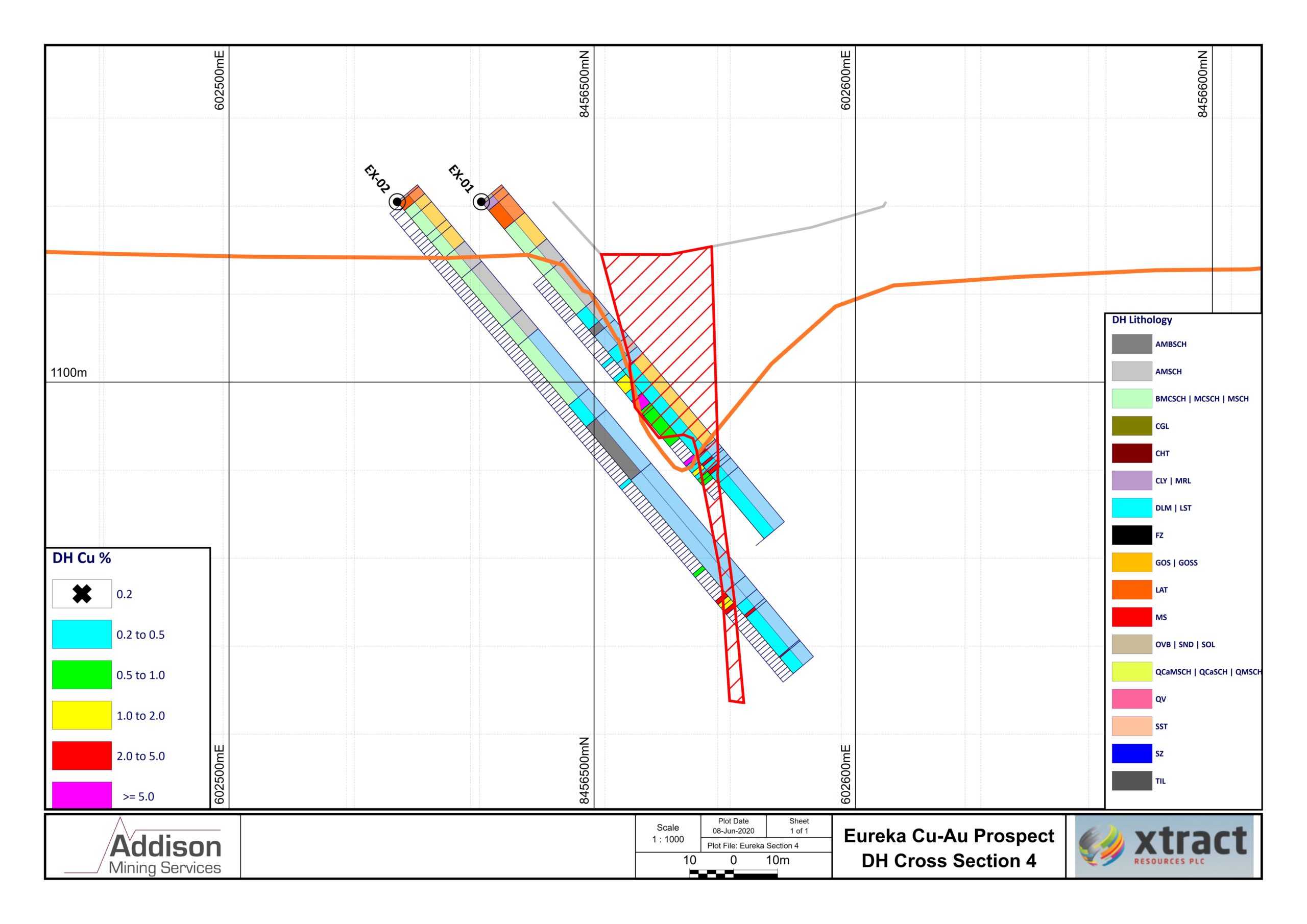 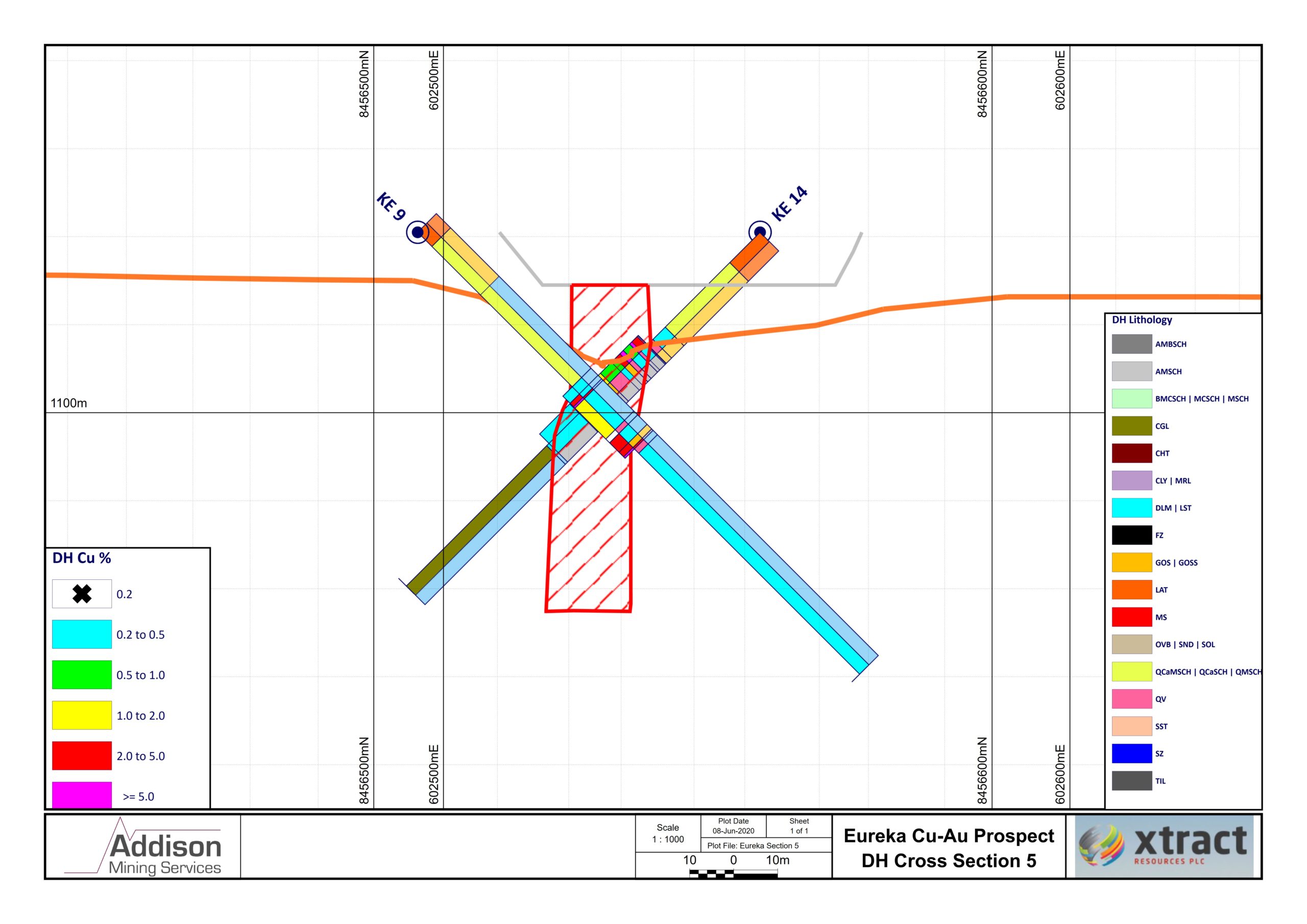 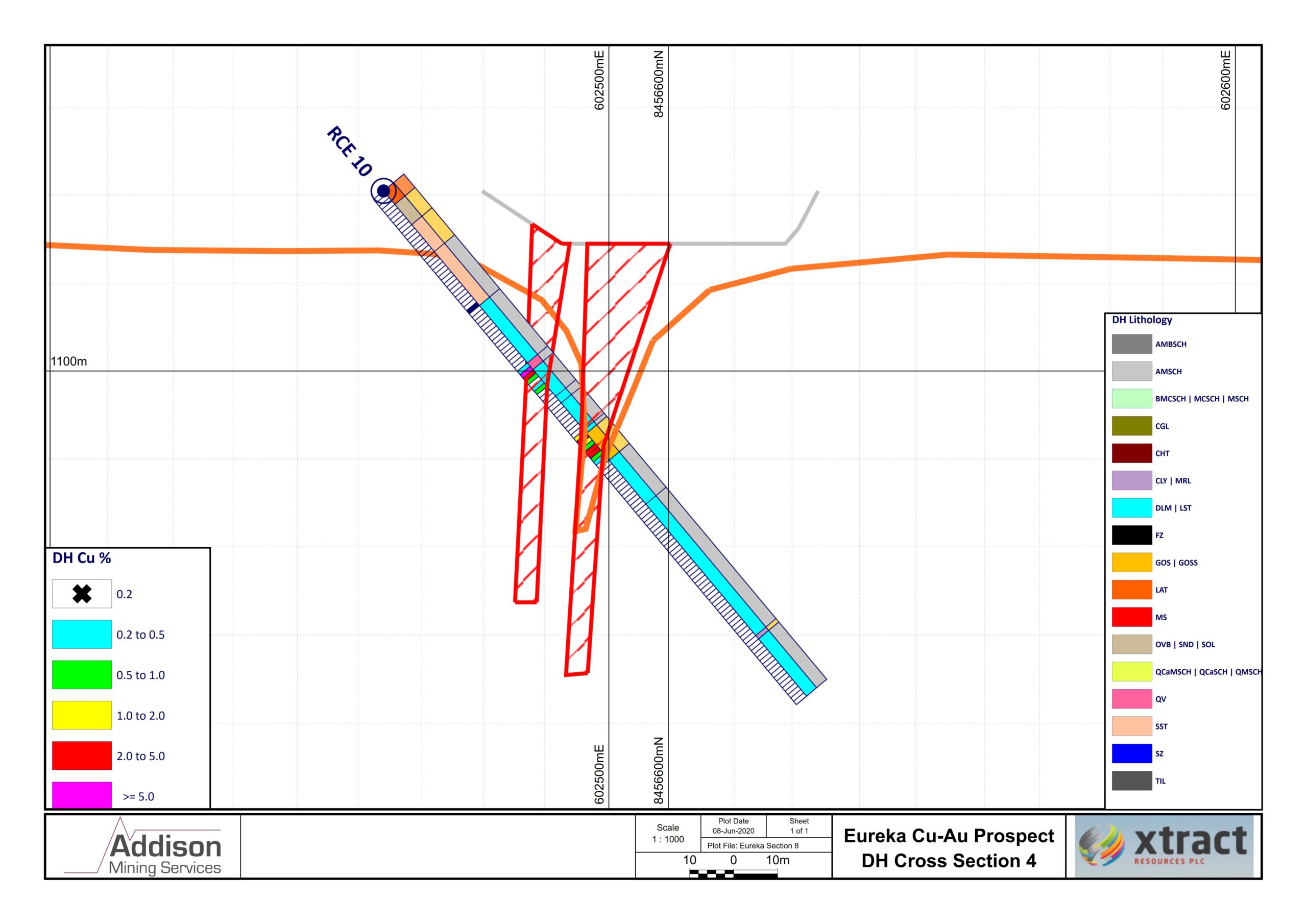