In April 2018, the Quoted Companies Alliance (QCA) published an updated version of its Code which provides UK small and mid-sized companies with a corporate governance framework that is appropriate for a Company of our size and nature. The Board considers the principles and recommendations contained in the QCA Code are appropriate and have therefore chosen to apply the QCA Code.

The updated 2018 QCA Code has 10 principles that should be applied.  Each principle is listed below together with a short explanation of how the Company applies each of the principles:

Principle One
Business Model and Strategy
The Board has and continues to pursue a strategy which can achieve long term value to its shareholders.  The investment framework has been to identify and invest in near-term resources assets that:

* Can be brought into production within 24 months;
* Are near or at surface without major capital expenditure;
* Are on the low end of the cash cost curve and have further upside growth potential;
* A low entry cost and located in favourable mining jurisdictions

The Company has in the past focused on precious metals and in particular gold projects and as at the date of this report has 2 new base metal projects in Zambia which meet the above criteria, whether it be an active or strategic investment. The Company will continue to seek to grow both businesses organically and will seek out further joint ventures and other arrangements that create enhanced value.

The Company’s local subsidiary, Explorator Limitada deals on a regular basis with institutions such as the Ministry of Mines and its subordinate departments, the Ministry of Land and Environmental as well as the Local Government of the District of Manica. The Company is also involved with the local community including projects, which have and will benefit the local community and surrounding areas.

As the Company progresses with its exploration projects in Zambia, it will implement the same procedures as currently in place with the rest of the group.

Management have focused on implementing put in place processes and systems to ensure that there is close oversight and contact with its key resources and relationships. The Company has close ongoing relationships with a broad range of its stakeholders and provides them with the opportunity to raise issues and provide feedback to the Company.

Principle Four
Risk Management
In addition to its other roles and responsibilities, the Audit Committee will be focusing on further ensuring that procedures are in place and are being implemented effectively to identify, evaluate and manage the significant risks faced by the Company. The risk assessment matrix below sets out those risks and identifies their ownership and the controls that are in place. This matrix is updated as changes arise in the nature of risks or the controls that are implemented to mitigate them. The Audit Committee will review and assess the risk matrix and the effectiveness on an annual basis. The following principal risks and controls to mitigate them, have been identified: 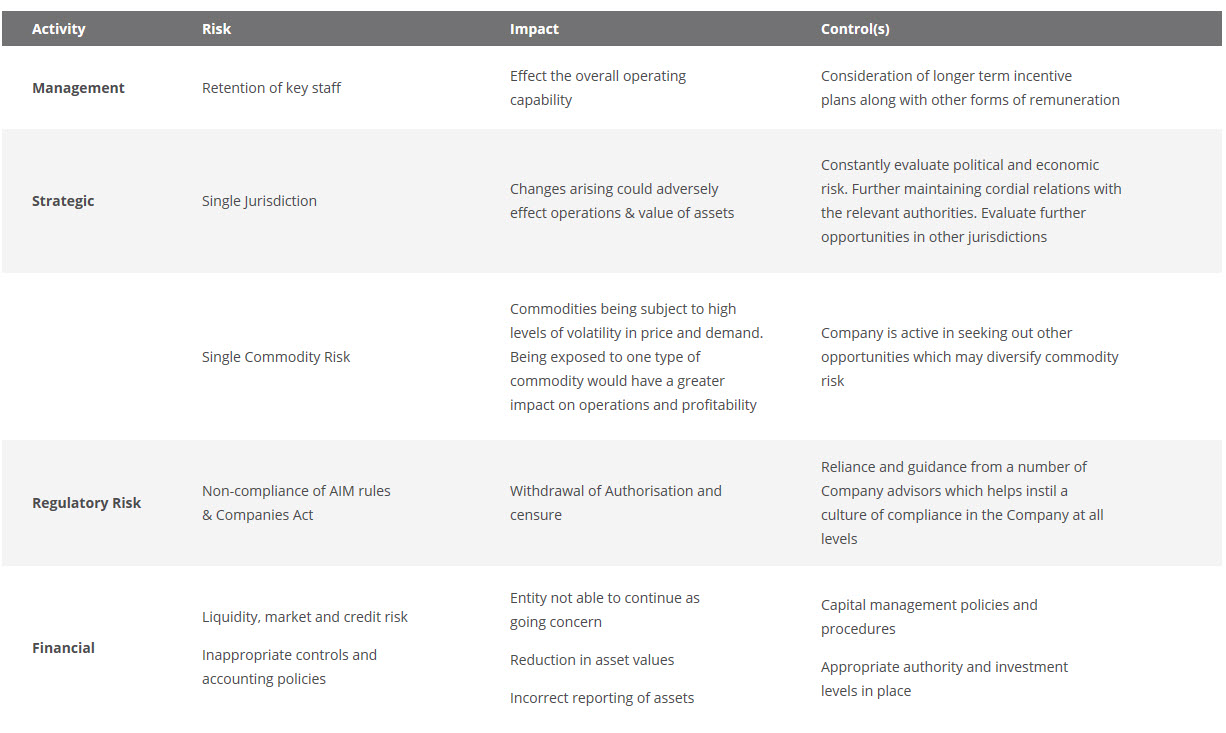 The Directors will continue to further establish procedures, as represented by this statement, for the purpose of providing a system of internal control. Due to the size of the Company and the interaction on a daily basis between Directors and Officers of the Company, the Board at this stage do not deem it necessary of practical to incorporate an internal audit function. The Board will continue to monitor the need for an internal audit function and continue to work closely with the Company’s financial accountant to ensure the effectiveness of its control systems.

All letters of appointment of Directors are available for inspection at the Company’s registered office during normal business hours.  The Board elects a Chairman to chair every meeting.

The Board holds formal meetings periodically as issues arise and require more details. The Directors are in contact and discuss all necessary issues on a regular basis and to ensure that the Non-Executive director, while not involved in the day to day running of the Company is still kept up to date on a regular basis.

The Company has established an Audit, Committee and a Remuneration Committee, particulars of which appear hereafter. All appointments to the Board are made by the Board as a whole as oppose to a Nominations Committee.  The Non-Executive Director is considered to be part time but can be expected to provide as much time to the Company as is required. From September 2012 to August 2016, Colin Bird acted as the Non- Executive Chairman. In August 2016, Colin Bird moved from being a Non-Executive Director to Executive Chairman shortly before the resignation of the former CEO. This change to an executive role came at a challenging time for the Company and through Colin Bird’s leadership and guidance the Company has been able to refocus operations.

The QCA recommends a balance between executive and non-executive Directors and recommends that there be two independent non-executives. In the case of Xtract, the Board has since the Board changes in August 2016 considered its composition to be appropriate considering the stage of operations and the period of restructuring and change.

Attendance at Board and Committee Meetings
To date the Directors, have attended all meetings. In order to be efficient, the Directors wherever possible try and meet formally and informally both in person and if not practical then by telephone.

Principle Six
Appropriate Skills and Experience of the Directors
The Board currently consists of three Directors and, in addition, the Company has employed the outsourced services of Lion Mining Finance Ltd to act as the Company Secretary. The Company believes that the current balance of skills in the Board as a whole, reflects a very broad range of commercial and professional skills across geographies and industries and each of the Director’s has experience in public markets.

The Board recognises that it currently has the necessary skills but will consider as part of any future recruitment an additional Non-Executive director with mining experiences, if the Board concludes that replacement or additional directors are required.

The Board shall review annually the appropriateness and opportunity for continuing professional development whether formal or informal.

Colin is a chartered mining engineer with multi commodity mine management experience in Africa, Spain, Latin America and in the Middle East. He has been involved in a number of public listings in the UK, Canada and South Africa and is currently Chief Executive Officer of Tiger Resource PLC, AIM-traded Galileo Resources PLC and Non-Executive Chairman and founder of Jubilee Metals Group PLC and serves as the Non-Executive Chairman of Europa Metals Ltd and Bezant Resources PLC. He was a founder of Kiwara PLC, which discovered the large copper project Kalumbila currently being developed by First Quantum Minerals Ltd. Colin was appointed Executive Chairman in August 2016. Colin Bird joined the Board of Xtract in September 2012.

Peter Moir has more than 30 years’ experience in upstream industry experience with Shell International, BG Group and as an independent Consultant. He has a combination of technical, operational and commercial aspects of the Exploration and Production business. He serves as a Director of Elko Energy Inc., and Moir Energy Ventures Ltd. He is a Chartered Engineer in the UK. His qualifications include B.Sc. Civil Engineering and an M.Eng. Petroleum Engineering from Heriot Watt University in Edinburgh.

Joel Silberstein joined the Company as Chief Financial Officer in June 2013 and was appointed as Finance Director in February 2014.  Prior to this Joel held the position of Group Controller and Vice President Finance of Toronto Stock Exchange quoted European Goldfields Limited, where he supported the executive team in growing a mining concern from exploration through development phases until the Company was taken over by Eldorado Gold Corporation. He has Honours Bachelor of Accounting Science degree from the University of South Africa and qualified as a chartered accountant with Mazars, Cape Town in 2002.

Principle Seven
Evaluation of Board Performance
The Company does not perform any Internal evaluation of the Board, the Committee and individual Directors. This will be undertaken going forward on an annual basis. The process will be in the form of peer appraisal and discussions in order to determine the effectiveness and performance of the Executive Directors, as well as the continued independence of the Non-Executive Directors.

The Appraisals will take place during the 2nd half of the calendar year. The results of the appraisals of each director will be benchmarked against any previous targets or milestones set in the previous year and will identify any new corporate and financial targets for the coming year.

The QCA code recommends that the Company maintains governance structures and processes in line with its culture and appropriate to its size and complexity.

Ultimate authority for all aspects of the Company’s activities rests with the Board, the respective responsibilities of the Chairman and Chief Executive Officer arising as a consequence of delegation by the Board. The Board has adopted appropriate delegations of authority, which set out matters, which are reserved to the Board. The Executive Chairman is responsible for the effectiveness of the Board, and the management of the Company’s business and primary contact with shareholders has been delegated by the Board to the Executive Chairman.

Audit and Compliance Committee
The Audit Committee comprises Peter Moir who chairs the committee and Colin Bird. This committee has primary responsibility for monitoring the Financial Reporting function and internal controls in order to ensure that the financial performance of the Company is properly measured and reported. The committee receives the Financial reports from the executive management and auditors relating to the interim and annual accounts and the accounting and internal control systems in use throughout the Company. The Audit Committee shall meet not less than twice in each financial year and it has unrestricted access to the Company’s auditors.

Non-Executive Directors
The Board is in the process of adopting guidelines for the appointment of Non-Executive Directors, which have been in place before the year end. The guidelines will provide for the orderly succession and rotation of the Chairman and non-executive directors insofar as both the Chairman and non-executive directors will be appointed for an initial term of three years and may, at the Board’s discretion believing it to be in the best interests of the Company, be appointed for subsequent terms. The Chairman may serve as a Non-Executive Director before commencing a first term as Chairman.

The Board has been and continues to be committed to maintaining good communication and having constructive dialogue with its shareholders. The Company currently has no institutional shareholders and has ongoing relationships with its private shareholders. The Executive Chairman regularly attends investor shows and conferences. In addition, all shareholders are encouraged to attend the Company’s Annual General Meeting.

The Company maintains a website (www.xtractresources.com) which allows investors to access any Company information. Any questions can be e-mailed to the Company and will be answered by the relevant member of management available to answer investor relations enquiries. The Company will continue to investigate ways of improving communication with shareholders whether through its current format or possibly moving to electronic communications with shareholders in order to maximise efficiency.